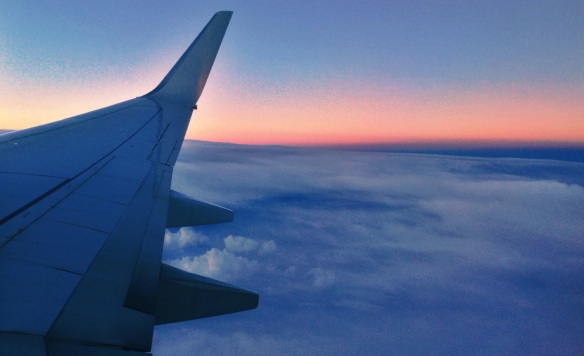 I finished my last day at my old job today. I’m flying home to Melbourne now after leaving for Sydney this morning at 6am. It’s been the longest work commute of my life.

That picture above, I just took it.

I went back for one day after five weeks of holidays. I suspect that this would be a good time for some kind of moving reflection about employment and jobs and vocation, but the flight attendant just gave me a Lindt ball. So I shall eat that instead.

Speaking of bowel cancer, I got given a cake at work today. It was a chocolate cake covered with strawberries. My boss’ wife baked it. It looked delishious. Unfortunately my boss forgot I was a glutard, so I just ate the strawberries while everyone else ate the cake. Perhaps there’s some sort of symbolism in that.

I spent my whole day sitting with my replacement telling him everything he needed to know to do my job. It disappointing that it only takes a day to replace me, but at least I wasn’t replaced by a computer. Although I wouldn’t mind being replaced by Siri. I suspect she’s incredibly good looking.

We just hit turbulence. The seat belt sign went on but the no smoking sign went off. I’m lighting up.

How do you sum up five years in a job?

I spent five years, driving all over Sydney and beyond, doing hundreds of talks about Jesus to thousands of kids. That’s pretty super. Plus I even got to fit in a few naps in my car by the side of the road along the ways. Jesus with occasional naps. That sounds to me like the perfect job.

So Why would I quit? Apart from that personal helicopter I get as a signing bonus from the church, I think I like doing ministry with people instead of to people. A lot of my job was standing in front of a crowd telling them things, I left because I want to spend more time beside people listening to them. My words might have more currency then.

Certainly my time hasn’t been wasted. It’s been very fruitful but it’s time to swap a wide ministry for a deep one.

Also I suspect I’ll be able to sleep in a bit later working for the church, it’s Jesus plus more sleep. Hard to argue with that.